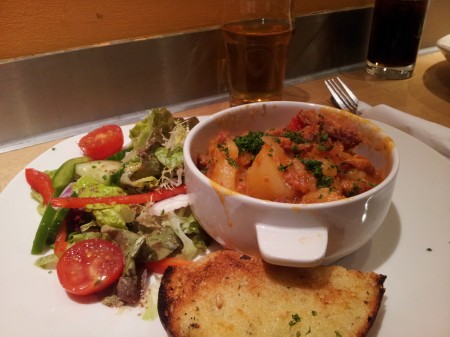 As you know, Edinburgh has some very nice Spanish restaurants. Choices of where to eat have increased in the last year at the same time as the Spanish language and culture has become more popular.

Months ago we had a very nice surprise when, stopping at the Filmhouse café for a quick meal before a movie, we found out that the plate of the day was “patatas con chorizo a la riojana”. We should admit that we were a bit suspicious beforehand despite that the FH food is always very tasty. Again they did it very well and we enjoyed a lovely plate of Spanish food as if we were in the north of Spain, where this recipe is traditional.

And if you want to try, here you are the recipe in English. Good luck in the kitchen!