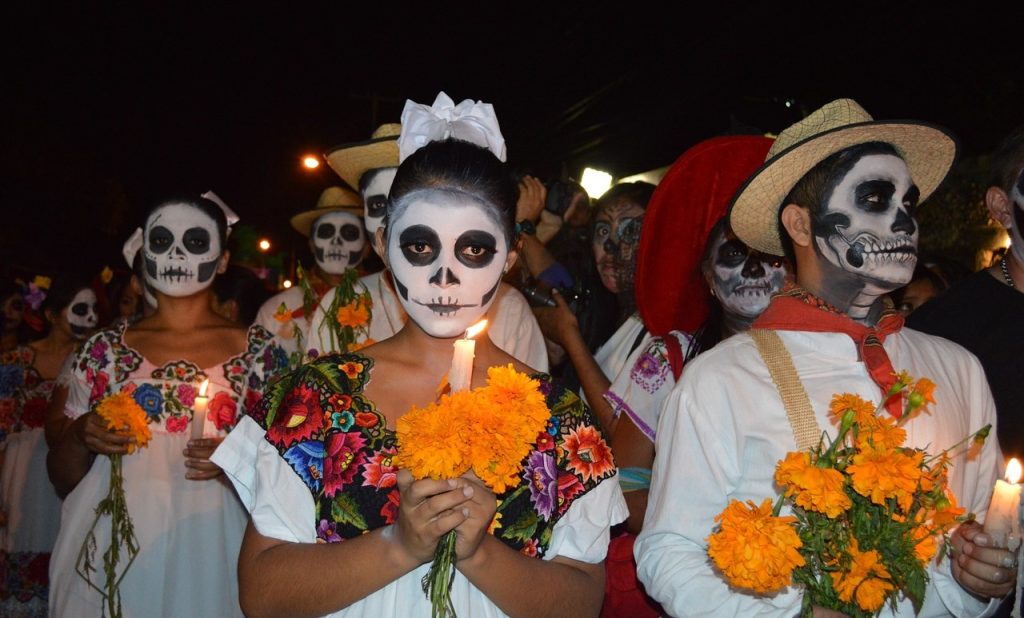 Upon that night, when fairies light

Or owre the lays, in splendid blaze,

This is is the beginning of Robert Burns’ Halloween poem (1786) as this is our topic for this month’s post.

This week is time for trick-or-treat, for costume parties, for buying pumpkins and making jack-o’-lanterns, visiting haunted places and some other traditions to celebrate Halloween but not only in the Anglophile countries but also in many other places throughout the world as this celebration has spread everywhere during the last thirty years thanks to Hollywood’s film industry.
But what about the traditions in the Spanish-speaking countries, how do we celebrate this time of the year?
Probably one of the most worldwide know holiday is Day of the Dead (Día de los Muertos), originally from Mexico where it has its origins. Every 1st November Mexicans honour the dead with different traditions, a mixture of Catholicism brought by the Spanish and some 3,000 years old Pre-Columbian indigenous rituals. The first day is dedicated to the children’s souls and 2nd November to the adults’ ones. However, for the Mexicans is not a sad day at all, as we would expect. They believe that dead relatives return those days, so they welcome them with different offerings such as food, drinks and parties. It is believed that death is part of the human existence and the deceased people are still considered part of the community. Some of the most famous symbols are the “calacas” which are skeleton figures and as well as the “calaveras” (skulls) that you can see everywhere during these celebrations in all forms and sizes. The bread of the Dead (Pan de Muertos) is a sweet bread eaten during these festivities along with the “calacas” and “calaveras” made out of candy.
If you would like to learn more about Día de Muertos you can watch Coco a 3D computer-animated film released in 2017 by Walt  Disney Pictures in which a 12-year-old boy visits the Land of the Dead.

Meanwhile in Spain, All Souls’ Day 2nd November following All Saints’ Day 1st November, people remember their deceased and beloved ones taking flowers to the cemetery and lightening candles. This day which is usually a holiday in Spain has its origin in the primitive Church to commemorate the anniversary of martyrs’ deaths. However, in different parts of Spain, it is celebrated in different ways.

In Galicia, Samaín which translates as the end of the summer, is a Celtic origin festival where people celebrate the end of the harvest and the beginning of the new Celtic year. It is also related to the Magosto festival, a traditional festivity which takes places not only in Galicia but also in some other parts of Northern Spain, including Catalonia where is known as Castanyada. The key ingredients are chestnut and fire so people eat roasted chestnuts and remember their beloved ones.

It also became a tradition across Spain to perform Don Juan Tenorio, a play written in 1884 by José Zorrilla, due to the fact that the final act takes places on All Saints’ Day. El Tenorio is considered to be the longest-running play in Spain as it has been performed at least once a year for over a century now.